Pride month is the occasion to lift up voices in the LGBTQ+* community. And while a time of celebration, we mustn’t forget that the origins of pride come from a serious place, where gay, lesbian, bisexual, transgender, and other queer members of society have had to fight for their rights and voices to be heard. For many, the freedom to assume one’s true identity openly is a courageous step.

Pride month is the occasion to lift up voices in the LGBTQ+* community. And while a time of celebration, we mustn’t forget that the origins of pride come from a serious place, where gay, lesbian, bisexual, transgender, and other queer members of society have had to fight for their rights and voices to be heard. For many, the freedom to assume one’s true identity openly is a courageous step.

On 31 March, 2017, Gilbert Baker the creator of the iconic Rainbow Flag sadly passed away. Mr. Baker was both an LGBTQ activist and artist, and was known for helping friends create banners for protests and marches.

To honour the memory of Gilbert Baker, NewFest and NYC Pride partnered with Ogilvy & Mather and font creation toolmaker Fontself to craft free fonts inspired by the design language of the iconic Rainbow Flag, the typeface was named 'Gilbert' after Mr. Baker.

The Gilbert font family was originally designed for striking headlines and statements that could live on banners for rallies and protests and it is now currently being built out into a whole family of weights and styles, for free.

Speaking of fonts, there are two that played an important role in the visual branding update for Heritage of Pride. Heritage of Pride is the non-profit organisation that plans and produces New York City's official LBGTQIA+ Pride events each year. After 40 years of amazing work, they wanted to update their branding to create a feeling of inclusivity and capture the spirit and importance of the organisation’s hometown — New York City.

The significance of NYC and its people to the LGBTQIA+* movement is paramount. Global creative consultancy Lippincott eagerly teamed up with them for the branding update with this in mind, and chose two typefaces with strong NYC roots to represent the organisation: Gotham® and Knockout®, both from NYC-based Hoefler&Co®. and now part of the Monotype Library.

Knockout in particular brings a fighting spirit to the design that honors the determination of Heritage of Pride’s decades long fight for equality and representation.  The fonts first appear around the identifiable flag emblem, and spell out Heritage of Pride’s bold messaging along with inclusive imagery and a symbolic range of colour. The look is fresh and meaningful but the core message remains the same, to inspire and empower every LGBTQIA+ person to proudly love and live their truth. 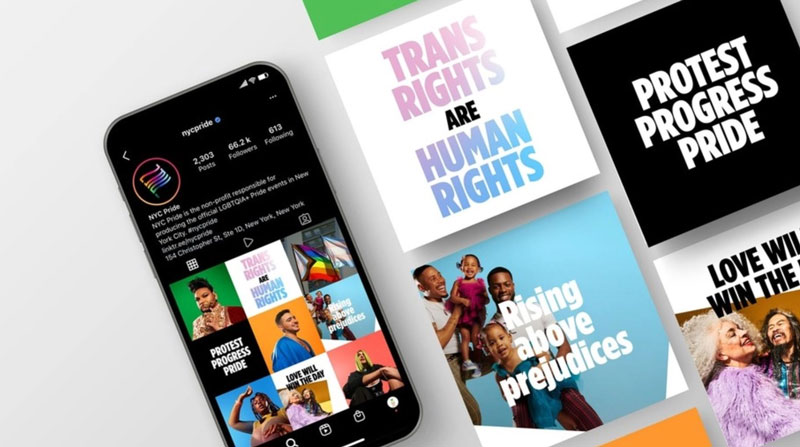 Heritage of Pride’s visual identity online and in print 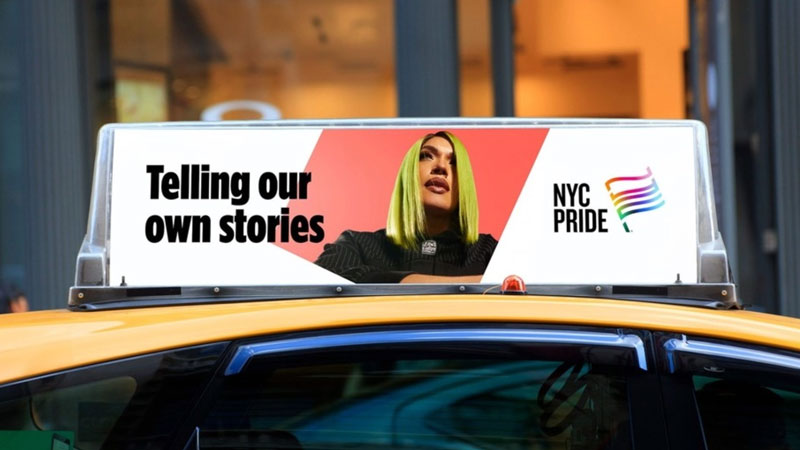 Two icons comes together in this advert, NYC and the city’s
yellow cabs by Monotype and Cait Oppermann

The Change for Trans campaign is beautifully designed campaign and community to make transgender people welcome in clothing stores across the world. With logo, poster, and an entire original typeface derived from garment patterns, its a welcome message to transgender people all around the world that they are welcome in stores, including the dressing rooms which are often gender assigned.

Stores around the world can join the movement and adopt the graphic design to make sure trans people know they are welcome in their stores and changing rooms, as they should be in all public spaces. 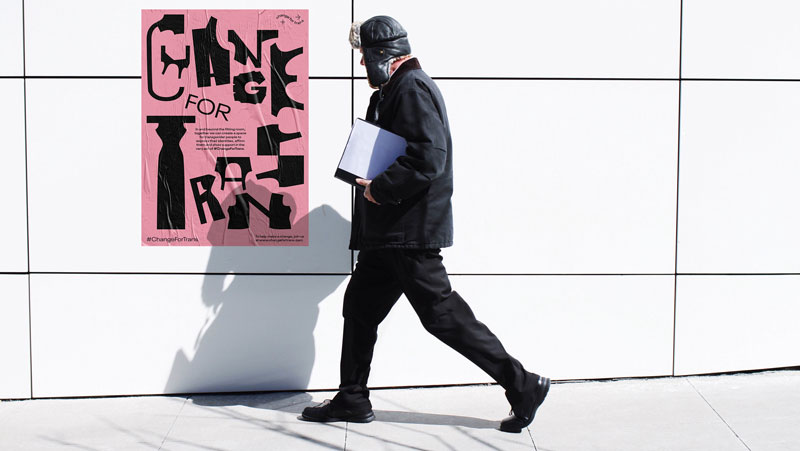 Change for Trans posters in the city streets

Since the early 1980's, Absolut have been supporting the LGBTQ community. A colorful, diverse and respectful world is something to strive and work for. Absolut Drop is the ultimate expression of this. Racism, sexism, homofobia and fear need to stop. To add a drop of change, we attended rallies around the world collecting racist and anti-LGBT hate sign we came across.

The ink printed on this bottle was taken from hate signs around the globe and repurposed to spread a better message. Love. Love is the most powerful force in the world. And today the world needs it more than ever. 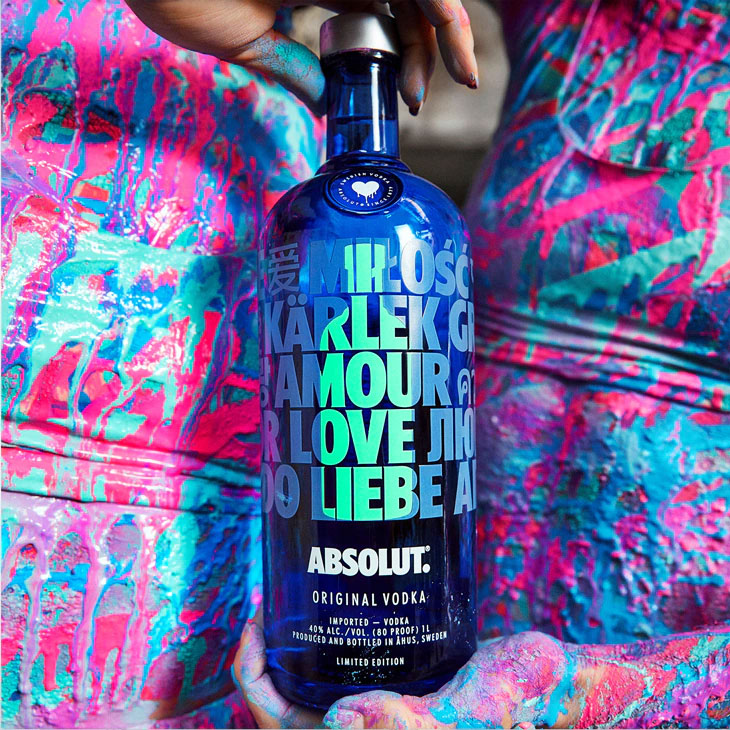 Captures from the Drop of Love campaign by Absolut

The DIY Guide to Wearing Your Pride (ZINE / PUBLICATION)

The DIY Guide To Wearing Your Pride

A design project to celebrate the diversity of the LGBTQ+ community and raise money for the Marsha P Johnson Institute who protects and defends the human rights of black transgender peo-ple. Photographs of queer people and allies modeling Pride flags in fashionable and joyful ways to express their own pride and educate people on the diversity of the Pride movement accompanied by graphic illustration demonstrating the sartorial how to of each look. The printed step-by-step instructions make it so everyone can recreate the looks and show support. All the profits go to the Marsha P. Johnson Institute. 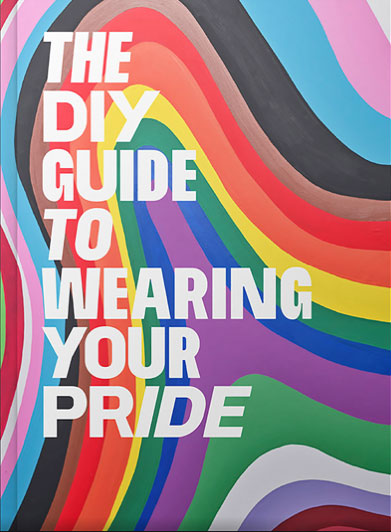 The DIY Guide To Wearing Your Pride

Zipeng Zhu designed Harry's, the company behind shaving, body, face, and hair products for men, has created a limited-edition set in honour of Pride. The queer designers seemingly endless creations are inspired by his life and community. The collection is packaged perfectly within a geometrical, colorful, and rainbow adorned box. Not only do the colours take you on a whimsical journey, but the geometrical typographical features are dazzling. A Limited Pride Set for Harry's. Like years past, Harry’s is prouder than ever to donate 100% of their profits from this limited-edition Shave with Pride set to The Trevor Project (@trevorproject) in the US and £10 from every purchased set and razor to akt (The Albert Kennedy Trust @aktcharity) in the UK. The box is covered in typography that represents all the people in our beautiful diverse and colorful community with my dazzling pattern.